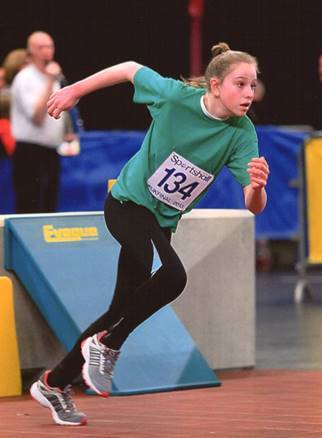 I was lucky enough to be selected to be part of the team representing West Yorkshire in the National Sportshall Finals at the LG Arena in the Birmingham NEC on Sunday 7th April. There were 18 teams representing counties across the length and breadth of the Uk including Ireland. Each team consisted of under 13 and under 15 girls and boys. The under 13 teams consisted of 12 female athletes and 12 male athletes and altogether there were over 400 athletes competing.

The competition began with an Olympic style opening ceremony where all the teams paraded into the area in order. Each team were given a different coloured T shirt to wear to identify them, we were wearing green. The ceremony was very colourful with loud music and flashing lights. Then the competition began.

I took part in the standing long jump, 4×2 relay and the 2 lap race. The competition was very tough. I set a personal best in the two lap race and came joint 20th overall. I also I equalled my personal best of 2.05m in the long jump which placed me 15th out of 24. Our relay team came fourth out of six in the heats but unfortunately only the top three qualified for the final. We finished eighth out of 12 overall in that event. Our team had mixed results with some individuals winning their events and we came in tenth overall in the final standings.

I tried my hardest in every event but at the end of the day it wasn’t just about the winning but also about the experience and the taking part. I was proud to be able to represent my county against the best in the country. I met and competed against a lot of very good athletes and made new friends too.

The competition finished with a closing ceremony, awards and speeches. This is the first time I have ever competed in such a prestigious event and I thoroughly enjoyed it.