Skip to content
You are here
Home > Bradford Airedale AC > About

Our Past and Present:

Bradford Airedale Athletic Club started life in 1880 and was known then as Airedale Harriers. “Harriers” was a common term used in those  days for clubs who participated in cross country running (off-road or trail running in today’s language). A popular theme for these clubs was for a runner (the hare) to set off with other club members following a short time later (the harriers). In 1965 Airedale Harriers amalgamated with the newer Spen Valley AC which resulted in the new name of Airedale & Spen Valley AC or ASVAC as it become popularly known. This partnership resulted in a golden era with teams winning the National Cross-Country Championships and a number of club members achieving international selection. The club has also had successes on the track with three women members representing Britain at the Olympics between 1948 and 1960 and Peter Warden a semi-finalist in the 400m hurdles at Tokyo in 1964 and bronze medallist in the Commonwealth Games in 1966.

During the 1980s a surge of interest in jogging and marathon running led to many new local road running clubs springing up. Many of these clubs took over the traditional recruitment areas of ASVAC and to reflect this the club was renamed Bradford Airedale Athletic Club. 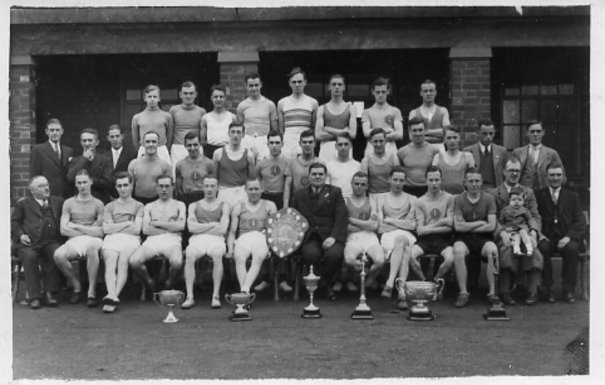 Taken in 1937 of club members with a selection of trophies. They are in front of the club house at Horsfall Stadium which is still used as the club’s base. 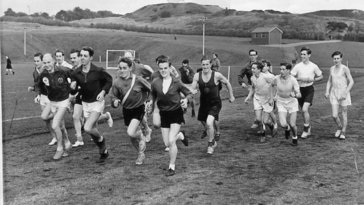 Early photo (date unknown) of a club training session – no synthetic running track in those days! Note the hockey match taking place on the centre field and the lack of perimeter fencing.

This website also supports the work of the Airedale Athletics clubs and their members as well as the YouCanRun groups. YouCanRun is an international running network that combines several clubs and training groups in South America and the UK. It was established by Hardy Matamala in Chile. He based these groups on his experiences in Bradford, replicating a successful formula that offers high-quality coaching and training plans for beginning and experienced runners.Hardy had assisted Simon Forde in setting up specialist endurance running clinics for the clubs of the Airedale Athletics partnership in Yorkshire. He then established groups in Santiago and Viña del Mar and YouCanRun is exploring new groups in Buenos Aires in Argentina, in northern England and elsewhere.